From Wikipedia, the free encyclopedia
Jump to navigation Jump to search
Sacred tree in Islamic scripture, marking the boundary which no creation can pass 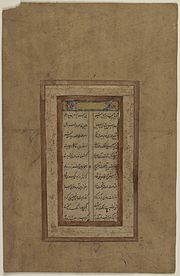 The 7th page of Bostan by the Persian poet Saadi, containing a poetic adaption of the Isra and Mi'raj and the Lote tree

The Sidraṫ al-Munṫahā (Arabic: سِـدْرَة الْـمُـنْـتَـهَى‎; lit. "Lote-Tree of the Utmost Farthest Boundary") is a large enigmatic lote tree or Sidr tree[1] that marks the end of the seventh heaven, the boundary which no creation can pass, according to Islamic beliefs. During the Isra and Mi'raj, Muhammad, being the only one allowed, traveled with the archangel Gabriel to the tree (where the angel stopped) beyond which it is said that God assigned the five daily prayers.[2]

10 So did Allah convey the inspiration to His Servant what He (meant) to convey.
11 The heart in no way falsified that which he saw.
12 Will ye then dispute with him concerning what he saw?
13 For indeed he saw him at a second descent,
14 Near the Lote-tree beyond which none may pass:
15 Near it is the Garden of Abode.
16 Behold, the Lote-tree was shrouded (in mystery unspeakable!)
17 (His) sight never swerved, nor did it go wrong!
18 For truly did he see, of the Signs of his Lord, the Greatest!

It [the Sidrat al-Muntahā] is a very large Tree (شَجَرَة - shajarah) beyond the 7th heaven. It is named the Sidrat al-Muntahā because there terminates at it whatever ascends from the earth and whatever descends [from heaven] including what comes down from God, including waḥy (divine inspiration) and other things besides. Alternatively, [it might be said that this name is because] it is the Uttermost Extremity or the very end of something [ or Boundary] (اِنْتِهاء - intihā' which is one of the many Arabic words for the word end) for the knowledge of the creatures approaching it, relative, that is, to its Existent Being [as located] above the heavens and the earth. So it is al-Muntahā (the Extremity, Boundary) with respect to [all human] modes of knowledge (عُلُوم - ʻulūm) or other things besides. And God is best informed [of this matter]. Thus [it was that] Muhammad saw Gabriel in that location (الْمَكَان - al-makān) which is the Domain of the Pure and Beautiful, Elevated [celestial] Souls (مَحَلُّ الْأَرْوَاحُ الْعُلُوِيَّةُ الْزَّكِيَّةُ الْجَمِيلِيَّة - maḥall al-arwāḥ al-ʻuluwiyyah al-zakiyyah al-jamīliyyah)...

Abdullah Yusuf Ali, whose The Holy Qur'an: Text, Translation and Commentary is among the most widely known English versions of the Qur'an,[4] explained that this tree "marked the bounds of heavenly knowledge as revealed to men, beyond which neither Angels nor men could pass."[5]

George Sale, the 18th century English scholar, has "beyond which Angels themselves must not pass; or, as some rather imagine, beyond which no creature's knowledge can extend."[6] Sale also notes that one commentator states that line 16 refers to the "host of angels worshipping" around the tree[7] and another that it is about the birds which sit on its branches.[8]

The 19th century English explorer, Richard Burton reported seeing an ancient Sidr tree in the mosque containing Muhammad's tomb in Medina. It was in a garden dedicated to Muhammad's daughter Fatimah. The fruit from the tree was being sold to pilgrims and its leaves used for washing dead bodies.[9]

The Sidrat al-Muntahā (usually transcribed as Sadratu'l-Muntahá in writings of the Baháʼí faith; see Baháʼí orthography) is a metaphor for the Manifestation of God.[10][11][12]

The lote-tree is used as a symbol, for example, by the Qatar Foundation: "The Sidra tree, growing strong and proud in the harshest of environments, has been a symbol of perseverance and nourishment across the borders of the Arab world. What is the significance of this glorious tree? With its roots bound in the soil of this world and its branches reaching upwards toward perfection, it is a symbol of solidarity and determination; it reminds us that the goals of this world are not incompatible with the goals of the spirit." The evergreen tree Ziziphus spina-christi represents this symbol in natural form.[13]