From Wikipedia, the free encyclopedia
Jump to navigation Jump to search
Not to be confused with Shang ring.

The shen ring is most often seen carried by the falcon god Horus, but was also carried by the vulture goddess Nekhbet. It was used as early as the Third Dynasty where it can be seen in the reliefs from Djoser's Step Pyramid complex.[1]

The symbol could be stretched to contain other objects, which were then understood as being eternally protected by the shen ring.[citation needed] In its elongated form the shen ring became the cartouche, which enclosed and protected a royal name.[2] 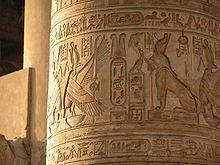 Outside of Egypt, a Tartessian archaeological site in southern Spain has a shen shaped altar.