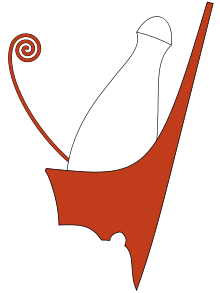 Pschent, the double crown of Egypt

The pschent (/ˈskɛnt/; Greek ψχέντ) was the double crown worn by rulers in ancient Egypt. The ancient Egyptians generally referred to it as sekhemty (sḫm.ty), the Two Powerful Ones.[1] It combined the White Hedjet Crown of Upper Egypt and the Red Deshret Crown of Lower Egypt.

The Pschent represented the pharaoh's power over all of unified Egypt.[2] It bore two animal emblems: an Egyptian cobra, known as the uraeus, ready to strike, which symbolized the Lower Egyptian goddess Wadjet; and an Egyptian vulture representing the Upper Egyptian tutelary goddess Nekhbet. These were fastened to the front of the Pschent and referred to as the Two Ladies. Later, the vulture head sometimes was replaced by a second cobra.[citation needed]

The king list on the Palermo Stone, which begins with the names of Lower Egyptian pharaohs (nowadays thought to have been mythological demigods), shown wearing the Red Crown, marks the unification of the country by giving the Pschent to all First Dynasty and later pharaohs.[4] The Cairo fragment, on the other hand, shows these prehistoric rulers wearing the Pschent.[5]

As is the case with the Deshret and the Hedjet Crowns, no Pschent has survived. It is known only from statuary, depictions, inscriptions, and ancient tales.

Among the deities sometimes depicted wearing the Double Crown are Horus[6] and Atum or Ra both representing the pharaoh or having a special relationship to the pharaoh.[7]