From Wikipedia, the free encyclopedia
Jump to navigation Jump to search
Region in the Eastern Mediterranean
For Latin Catholics in the Ottoman Empire, see Levantines (Latin Christians). For other uses, see Levantine and Levant (disambiguation).
Not to be confused with Levante or Levent.

The term entered English in the late 15th century from French.[3] It derives from the Italian Levante, meaning "rising", implying the rising of the Sun in the east,[2][4] and is broadly equivalent to the term al-Mashriq (Arabic: ٱلْمَشْرِق‎, [ʔal.maʃ.riq]),[5] meaning "the eastern place, where the Sun rises".[6]

In the 13th and 14th centuries, the term levante was used for Italian maritime commerce in the Eastern Mediterranean, including Greece, Anatolia, Syria-Palestine, and Egypt, that is, the lands east of Venice.[2] Eventually the term was restricted to the Muslim countries of Syria-Palestine and Egypt.[2] In 1581, England set up the Levant Company to monopolize commerce with the Ottoman Empire.[2] The name Levant States was used to refer to the French mandate over Syria and Lebanon after World War I.[2][4] This is probably the reason why the term Levant has come to be used more specifically to refer to modern Syria, Lebanon, Palestine, Israel, Jordan, and Cyprus.[2] Some scholars mistakenly believed that it derives from the name of Lebanon.[2] Today the term is often used in conjunction with prehistoric or ancient historical references. It has the same meaning as "Syria-Palestine" or Ash-Shaam (Arabic: ٱلشَّام‎, /ʔaʃ.ʃaːm/), the area that is bounded by the Taurus Mountains of Turkey in the North, the Mediterranean Sea in the west, and the north Arabian Desert and Mesopotamia in the east.[7] Typically, it does not include Anatolia (also called Asia Minor), the Caucasus Mountains, or any part of the Arabian Peninsula proper. Cilicia (in Asia Minor) and the Sinai Peninsula (Asian Egypt) are sometimes included.

As a name for the contemporary region, several dictionaries consider Levant to be archaic today.[8][9][10] Both the noun Levant and the adjective Levantine are now commonly used to describe the ancient and modern culture area formerly called Syro-Palestinian or Biblical: archaeologists now speak of the Levant and of Levantine archaeology;[11][12][13][14] food scholars speak of Levantine cuisine;[15][16] and the Latin Christians of the Levant continue to be called Levantine Christians.[17]

The Levant has been described as the "crossroads of western Asia, the eastern Mediterranean, and northeast Africa",[18] and the "northwest of the Arabian plate".[19] The populations of the Levant[20][21] share not only the geographic position, but cuisine, some customs, and history. They are often referred to as Levantines.[22]

See also: Names of the Levant

French medal commemorating the Franko-Turkish War in Cilicia, circa 1920

The term Levant, which appeared in English in 1497, originally meant the East in general or "Mediterranean lands east of Italy".[23] It is borrowed from the French levant "rising", referring to the rising of the sun in the east,[23] or the point where the sun rises.[24] The phrase is ultimately from the Latin word levare, meaning 'lift, raise'. Similar etymologies are found in Greek Ἀνατολή (Anatolē, cf. Anatolia), in Germanic Morgenland (literally, "morning land"), in Italian (as in "Riviera di Levante", the portion of the Liguria coast east of Genoa), in Hungarian Kelet, in Spanish and Catalan Levante and Llevant, ("the place of rising"), and in Hebrew (Hebrew: מִזְרָח‎, mizrah, "east"). Most notably, "Orient" and its Latin source oriens meaning "east", is literally "rising", deriving from Latin orior "rise".[25]

The notion of the Levant has undergone a dynamic process of historical evolution in usage, meaning, and understanding. While the term "Levantine" originally referred to the European residents of the eastern Mediterranean region, it later came to refer to regional "native" and "minority" groups.[26]

The term became current in English in the 16th century, along with the first English merchant adventurers in the region; English ships appeared in the Mediterranean in the 1570s, and the English merchant company signed its agreement ("capitulations") with the Ottoman Sultan in 1579.[27] The English Levant Company was founded in 1581 to trade with the Ottoman Empire, and in 1670 the French Compagnie du Levant was founded for the same purpose. At this time, the Far East was known as the "Upper Levant".[2]

In early 19th-century travel writing, the term sometimes incorporated certain Mediterranean provinces of the Ottoman empire, as well as independent Greece (and especially the Greek islands). In 19th-century archaeology, it referred to overlapping cultures in this region during and after prehistoric times, intending to reference the place instead of any one culture. The French mandate of Syria and Lebanon (1920–1946) was called the Levant states.[2][4]

Geography and modern-day use of the term 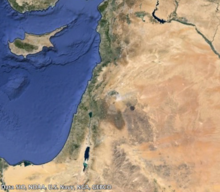 Satellite view of the Levant including Cyprus, Syria, Israel, Jordan, Lebanon, Palestine and the Northern Sinai

Today, "Levant" is the term typically used by archaeologists and historians with reference to the history of the region. Scholars have adopted the term Levant to identify the region due to it being a "wider, yet relevant, cultural corpus" that does not have the "political overtones" of Syria-Palestine.[b][c] The term is also used for modern events, peoples, states or parts of states in the same region,[28] namely Cyprus, Egypt, Iraq, Israel, Jordan, Lebanon, Palestine, Syria, and Turkey are sometimes considered Levant countries (compare with Near East, Middle East, Eastern Mediterranean and Western Asia). Several researchers include the island of Cyprus in Levantine studies, including the Council for British Research in the Levant,[29] the UCLA Near Eastern Languages and Cultures department,[30] Journal of Levantine Studies[31] and the UCL Institute of Archaeology,[18] the last of which has dated the connection between Cyprus and mainland Levant to the early Iron Age. Archaeologists seeking a neutral orientation that is neither biblical nor national have used terms such as Levantine archaeology and archaeology of the Southern Levant.[32][33]

While the usage of the term "Levant" in academia has been restricted to the fields of archeology and literature, there is a recent attempt to reclaim the notion of the Levant as a category of analysis in political and social sciences. Two academic journals were recently launched: Journal of Levantine Studies, published by the Van Leer Jerusalem Institute and The Levantine Review, published by Boston College.

The word Levant has been used in some translations of the term ash-Shām as used by the organization known as ISIL, ISIS, and other names, though there is disagreement as to whether this translation is accurate.[34] 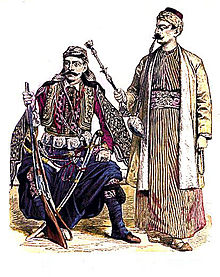 The largest religious group in the Levant are the Muslims and the largest cultural-linguistic group are Arabs, due to the Muslim conquest of the Levant in the 7th century and subsequent Arabization of the region.[35][36] Other large ethnic groups in the Levant include Jews, Kurds, Turks, Turkmens, Assyrians and Armenians.[37]

The majority of Muslim Levantines are Sunni with Alawi and Shia minorities. There are also Jews, Christians, Yazidi Kurds, Druze, and other smaller sects. [38]

Until the establishment of the modern State of Israel in 1948, Jews lived throughout the Levant alongside Muslims and Christians; since then, almost all have been expelled from their homes and sought refuge in Israel.

There are many Levantine Christian groups such as Greek, Oriental Orthodox (mainly Syriac Orthodox, Coptic, Georgian, and Maronite), Roman Catholic, Nestorian, and Protestant. Armenians mostly belong to the Armenian Apostolic Church. There are Levantines or Franco-Levantines who are mostly Roman Catholic. There are also Circassians, Turks, Samaritans, and Nawars. There are Assyrian peoples belonging to the Assyrian Church of the East (autonomous) and the Chaldean Catholic Church (Catholic).[39]

In addition, this region has a number of sites that are of religious significance, such as Al-Aqsa Mosque,[40] the Church of the Holy Sepulchre,[41] and the Western Wall[42] in Jerusalem. 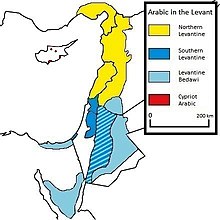 Map representing the distribution of the Arabic dialects in the area of the Levant.

Among the languages of Israel, the official language is Hebrew; Arabic was until July 19, 2018, also an official language.[44] The Arab minority, in 2018 about 21% of the population of Israel,[44] speaks a dialect of Levantine Arabic essentially indistinguishable from the forms spoken in the Palestinian territories.

Of the languages of Cyprus, the majority language is Greek, followed by Turkish (in the north). Two minority languages are recognized: Armenian, and Cypriot Maronite Arabic, a hybrid of mostly medieval Arabic vernaculars with strong influence from contact with Greek, spoken by approximately 1000 people.[45]

Other places in the east of a larger region