From Wikipedia, the free encyclopedia
Jump to navigation Jump to search
For other uses, see Leah (disambiguation). 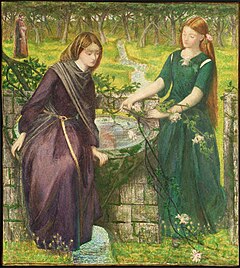 Leah[a] (Hebrew: לֵאָ֑ה‎) is an important, albeit minor, character in Judeo-Christian literature, the unloved wife of the Biblical patriarch Jacob.

Leah is first introduced in the Book of Genesis, or the first book of the Torah, in Genesis 29:16. In that passage, she is said to be the daughter of Laban and the older sister of Rachel. Earlier in the Book of Genesis, in Genesis 24:29, it is said that Laban is the brother of Rebecca, the wife of Isaac and mother of Jacob and Esau, and, as it is said in Genesis 24:47 that Rebecca is the daughter of Bethuel, it is established that Bethuel is also the father of Laban. Rabbinic literature gives expansion to Leah's immediate family, though some sources contradict one another. In the Book of Jasher, in Chapter 28, their mother is named as Adinah and it is stated that Leah and Rachel were not only sisters but twins, born to Laban following years of childlessness.[4] Rabbinic literature also speaks of their siblings, brothers Beor, Alub, and Murash, and half-sisters, Zilpah and Bilhah, who would both serve as a mistress, or pilegesh, of Jacob, though some sources disagree, instead naming Zilpah and Bilhah as the daughters of Rotheus, a man close to Laban but unrelated. If Zilpah and Bilhah were indeed half-sisters of Leah of Rachel, this would make Leah's adoptive sons, Gad and Asher, and Rachel's adoptive sons, Dan and Naphtali, her nephews. According to Genesis 28:2, the family resided in Paddan Aram, an area believed to correspond with the historical Upper Mesopotamia.[5]

Prior to her and Rachel's mentioning, the Book of Genesis details how their first cousin and future husband, Jacob, with the help of his mother, Rebecca, willfully deceives his dying father, Isaac, into giving him his twin brother Esau's birthright. Fearful of his brother's wrath, Jacob flees his homeland for Haran, where he meets his maternal family, including Laban and his daughters. Biblical passages are dismissive of Leah and favorable of Rachel, with Rachel said to be beautiful and of Leah, only that she had "weary" or "tired" eyes. Jacob is eager to marry Rachel and agrees to provide seven years' labor to her father if he can marry her. Laban initially agrees but, on the night of what would've been Jacob and Rachel's wedding, Laban reneges; he insists Jacob marry Leah instead, as she is older. Jacob is ultimately allowed to marry Rachel, which he does immediately after the festivities related to his wedding to Leah end, in exchange for another seven years' labor.

Leah's life as Jacob's wife was not at all a happy one. So lonely was she that even the LORD took notice of it and blessed her with many children as consolation. Still, despite Rachel's infertility, Jacob still favored Rachel over her. He also favored Rachel's sons, Joseph and Benjamin, over Leah's, and made no attempts to hide that from her or his other children. Notably, he took the firstborn's birthright, which entitles a firstborn to a larger inheritance in Jewish law, from Reuben, his oldest son, to Joseph, who was his second-youngest son, and, in Genesis 33:2, when he is confronted by Esau, puts Leah, along with Zilpah and Bilhah and all of their sons, in front of himself, Rachel, and Joseph, to be used as something of a buffer or a shield to protect himself in the event the confrontation turned violent. Even after Rachel's death, Leah's situation did not improve, as Jacob took Bilhah, Rachel's handmaiden, as his primary partner.

The Torah introduces Leah by describing her with the phrase, "Leah had tender eyes" (Hebrew: ועיני לאה רכות) (Genesis 29:17). It is argued as to whether the adjective "tender" (רכות) should be taken to mean "delicate and soft" or "weary".[6]. Leah's (and Rachel's) parents were Laban and Adinah .

The commentary of Rashi cites a Rabbinic interpretation of how Leah's eyes became weak. According to this story, Leah was destined to marry Jacob's older twin brother, Esau. In the Rabbinic mind, the two brothers are polar opposites; Jacob being a God-fearing scholar and Esau being a hunter who also indulges in idolatry and adultery. But people were saying, "Laban has two daughters and his sister, Rebekah, has two sons. The older daughter (Leah) will marry the older son (Esau), and the younger daughter (Rachel) will marry the younger son (Jacob)."[7] Hearing this, Leah spent most of her time weeping and praying to God to change her destined mate. Thus the Torah describes her eyes as "soft" from weeping. God hearkens to Leah's tears and prayers and allows her to marry Jacob even before Rachel does.

Leah becomes Jacob's wife through a deception on the part of her father, Laban. In the Biblical account, Jacob is dispatched to the hometown of Laban—the brother of his mother Rebekah—to avoid being killed by his brother Esau, and to find a wife. Out by the well, he encounters Laban's younger daughter Rachel tending her father's sheep, and decides to marry her. Laban is willing to give Rachel's hand to Jacob as long as he works seven years for her.

On the wedding night, however, Laban switches Leah for Rachel. Later Laban claims that it is uncustomary to give the younger daughter away in marriage before the older one (Genesis 29:16-30). Laban offers to give Rachel to Jacob in marriage in return for another seven years of work (Genesis 29:27). Jacob accepts the offer and marries Rachel after the week-long celebration of his marriage to Leah. 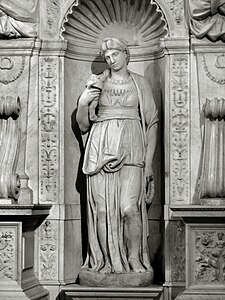 Michelangelo's Leah at the tomb of Pope Julius II at San Pietro in Vincoli.

Leah is the mother of six of Jacob's sons, including his first four (Reuben, Simeon, Levi, and Judah), and later two more (Issachar and Zebulun), and a daughter (Dinah). According to the scriptures, God saw that Leah was "unloved" and opened her womb as consolation.

One day, Leah's firstborn son Reuben returns from the field with mandrakes for his mother. Leah has not conceived for a while, and this plant, whose roots resemble the human body, is thought to be an aid to fertility.[9] Frustrated that she is not able to conceive at all, Rachel offers to trade her night with their husband in return for the mandrakes. Leah agrees, and that night she sleeps with Jacob and conceives Issachar. Afterwards she gives birth to Zebulun and to a daughter, Dinah. After that, God remembers Rachel and gives her two sons, Joseph and Benjamin.

On a homiletical level, the classic Chassidic texts explain the sisters' rivalry as more than marital jealousy. Each woman desired to grow spiritually in her avodat HaShem (service of God), and therefore sought closeness to the tzadik (Jacob) who is God's personal emissary in this world. By marrying Jacob and bearing his sons, who would be raised in the tzadik's home and continue his mission into the next generation (indeed, all 12 sons became tzadikim in their own right and formed the foundation of the Nation of Israel), they would develop an even closer relationship to God. Therefore, Leah and Rachel each wanted to have as many of those sons as possible, going so far as to offer their handmaids as proxies to Jacob so they could have a share in the upbringing of their handmaids' sons, too.[10]

Each woman also continually questioned whether she was doing enough in her personal efforts toward increased spirituality, and would use the other's example to spur herself on. Rachel envied Leah's tearful prayers, by which she merited to marry the tzadik and bear six of his twelve sons.[8][10] The Talmud (Megillah 13b) says that Rachel revealed to Leah the secret signs which she and Jacob had devised to identify the veiled bride, because they both suspected Laban would pull such a trick.[11]

Leah died some time before Jacob (according to Genesis 49:31). She is thought to be buried in the Cave of the Patriarchs in Hebron alongside Jacob. This cave also houses the graves of Abraham and Sarah, and Isaac and Rebekah.[12] 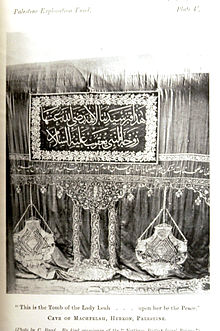 In medieval Christian symbolism, Rachel was taken as a symbol of the contemplative (monastic) Christian life, and Leah as a symbol of the active (non-monastic) life.[15] Dante Alighieri's Purgatorio includes a dream of Rachel and Leah, which inspired illustrations by Dante Gabriel Rossetti and others:

"... in my dream, I seemed to see a woman
both young and fair; along a plain she gathered
flowers, and even as she sang, she said:
Whoever asks my name, know that I'm Leah,
and I apply my lovely hands to fashion
a garland of the flowers I have gathered."[16]