The Jordan River or River Jordan (Arabic: نَهْر الْأُرْدُنّ‎, Nahr al-Urdunn, Hebrew: נְהַר הַיַּרְדֵּן‎, Nahar ha-Yarden; Classical Syriac: ܢܗܪܐ ܕܝܘܪܕܢܢ‎), also known as Nahr Al Sharieat (Arabic: نهر الشريعة‎), is a 251-kilometre-long (156 mi) river in the Middle East that flows roughly north to south through the Sea of Galilee (Hebrew: כנרת Kinneret, Arabic: Bohayrat Tabaraya, meaning Lake of Tiberias) and on to the Dead Sea. Jordan and the Golan Heights border the river to the east, while the West Bank and Israel lie to its west. Both Jordan and the West Bank take their names from the river.

The river holds major significance in Judaism and Christianity since the Bible says that the Israelites crossed it into the Promised Land and that Jesus of Nazareth was baptized by John the Baptist in it.[2]

Over its upper course (fed by the Hasbani River, Banias River, Dan River, and the Iyyon Stream), the river drops rapidly in a 75-kilometre (47 mi) run to the once large and swampy Lake Hula, which is slightly above sea level. Exiting the now much-diminished lake, it goes through an even steeper drop over the 25 kilometres (16 mi) down to the Sea of Galilee, which it enters at its northern end. The Jordan deposits much of the silt it is carrying within the lake, which it leaves again near its southern tip at Degania Dam. At that point, the river is situated about 210 metres below sea level. The last 120-kilometre (75 mi)-long section follows what is commonly termed the "Jordan Valley", which has less gradient (the total drop is another 210 metres) so that the river meanders before entering the Dead Sea, a terminal lake about 422 metres below sea level with no outlet. Two major tributaries enter from the east during this last section: the Yarmouk River and Zarqa River.

Its section north of the Sea of Galilee is within the boundaries of Israel and forms the western boundary of the Golan Heights. South of the lake, it forms the border between the Kingdom of Jordan (to the east), and Israel (to the west). 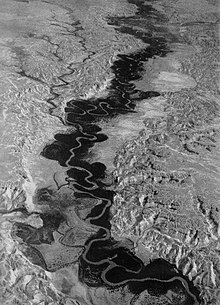 The streams coming together to create the River Jordan in its upper basin are, west to east:

South of the Sea of Galilee, the Jordan River receives the waters of further tributaries, the main ones, both coming from the east (Jordan), being

While several hypotheses for the origin of the river's name have been proposed, the most accepted is that it comes from Semitic Yard|on 'flow down' <√ירד reflecting the river's declivity.[10]:121[11] Cognates of the word are found in Aramaic, Hebrew, and other Semitic languages.[11] The first recorded use of the name appears as Yārdon in Anastasi I, an ancient Egyptian papyrus that probably dates to the time of Rameses II.[12] Early Arab chronicles referred to the river as Al-Urdunn.[13]

After the Crusades, the Arabic name Nahr Al Sharieat (Arabic: نهر الشريعة‎), literally "the watering place" began to be used,[13] and was recorded by medieval geographers such as Abu'l-Fida and Al-Dimashqi.[13] The name was shown in various forms on most notable 19th century maps of the region, and was described by Edward Robinson in his Biblical Researches in Palestine.[14][15] Although historical sources do not appear to make this distinction, it is described in some modern sources as the name for the part of the river before it flows into Lake Tiberias.[16]

Coloured postcard of the Jordan River, by Karimeh Abbud, circa 1925

In 1964, Israel began operating a pumping station that diverts water from the Sea of Galilee to the National Water Carrier. Also in 1964, Jordan constructed a channel that diverted water from the Yarmouk River, a main tributary of the Jordan River, to the East Ghor Canal. Syria has also built reservoirs that catch the Yarmouk's waters. Environmentalists blame Israel, Jordan and Syria for extensive damage to the Jordan River ecosystem.[18]

A small section of the northernmost portion of the Lower Jordan, the first ca. 3-kilometre (1.9 mi) below the Sea of Galilee, has been kept pristine for baptism and local tourism. Most polluted is the 100-kilometre downstream stretch—a meandering stream from above the confluence with the Yarmouk to the Dead Sea. Environmentalists say the practice of letting sewage and brackish water flow into the river has almost destroyed its ecosystem. Rescuing the Jordan could take decades, according to environmentalists.[18] In 2007, FoEME named the Jordan River as one of the world's 100 most endangered ecological sites, due in part to lack of cooperation between Israel and neighboring Arab states.[20]

Recent literature shows the role of power asymmetries and of discourses and narratives in shaping hydropolitics along the Jordan River Basin.[21]

Route 90, part of which is named after Rehavam Zeevi, connects the northern and southern tips of the Israeli-occupied West Bank and parallels the Jordan River on the western side.

There are two border crossings between Israel and Jordan which cross the river over bridges. The northern one, Jordan River Crossing or Sheikh Hussein Bridge is near Beit She'an; the southern one, Allenby Bridge (also King Hussein Bridge), is near Jericho.

Importance as a water source

Until the first decade of the 21st century, the waters of the Jordan River had been the largest water resource for Israel; lately, desalinated sea water from the Mediterranean has taken over this role. Israel's National Water Carrier, completed in 1964, has delivered water from the Sea of Galilee to the Israeli coastal plain for over four decades, until prolonged drought led to abandoning this solution in favour of desalination.

Jordan receives 50,000,000 cubic metres (1.8×109 cu ft) of water from the river, a quantity which is regulated by the 1994 peace treaty with Israel.[22] In the past, one of the main water resources in Jordan was the Jordan River, with a flow of 1.3 billion m3 per year (BCM/yr). However, after Israel built the National Water Carrier in 1953 and diverted water from Lake Tiberias to Israel's coastal plains and southern desert, the flow of the Lower Jordan River dropped significantly. The 50 MCM/yr that Israel provides from Lake Tiberias as part of the 1994 peace treaty was meant to compensate for this loss. A 2010 study found that the Lower Jordan River has been reduced to 2% of its historic flow.[23] Water quality has also deteriorated sharply, with high levels of salinity and pollution from agricultural fertilizer and untreated wastewater upstream in Israel and the West Bank.[24]

Conflict about the waters of the Jordan River was a contributing factor to the Six-Day War when, starting in 1965, Syria attempted to divert some of its headwaters in collaboration with Lebanon and Jordan.[25] The diversion works would have reduced the water availability for Israel's carrier by about 35%, and Israel's overall water supply by about 11%.[26] 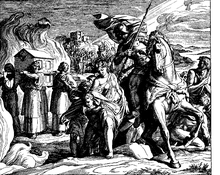 Crossing the Jordan, from Die Bibel in Bildern

In the Hebrew Bible the Jordan is referred to as the source of fertility of a large plain ("Kikkar ha-Yarden"), said to be watered like "the garden of the LORD" (Genesis 13:10). There is no regular description of the Jordan in the Bible; only scattered and indefinite references to it are given. Jacob crossed it and its tributary, the Jabbok (the modern Al-Zarqa), on his way back from Haran (Genesis 32:11, 32:23–24). It is noted as the line of demarcation between the "two tribes and the half tribe" settled to the east (Numbers 34:15) and the "nine tribes and the half tribe of Manasseh" that, led by Joshua, settled to the west (Joshua 13:7, passim).

Opposite Jericho, it was called "the Jordan of Jericho" (Numbers 34:15; 35:1). The Jordan has a number of fords, and one of them is famous as the place where many Ephraimites were slain by Jephthah (Judges 12:5–6). It seems that these are the same fords mentioned as being near Beth-barah, where Gideon lay in wait for the Midianites (Judges 7:24). In the plain of the Jordan, between Succoth and Zarthan, is the clay ground where Solomon had his brass-foundries (1 Kings 7:46). In 2 Kings 6:1-4 the Jordan valley is portrayed as a woodland region. Biblical commentator Albert Barnes suggested that "trees were rare in most parts of Palestine, but plentiful in the Jordan Valley".[27]

In biblical history, the Jordan appears as the scene of several miracles, the first taking place when the Jordan, near Jericho, was crossed by the Israelites under Joshua (Joshua 3:15–17). Later the two tribes and the half tribe that settled east of the Jordan built a large altar on its banks as "a witness" between them and the other tribes (Joshua 22:10, 22:26, et seq.). The Jordan was crossed by Elijah and Elisha on dry ground (2 Kings 2:8, 2:14). The prophet and wonder-worker Elisha performed two miracles at the Jordan: he healed Naaman's leprosy by having him bathe in its waters (2 Kings 5:14), and he made an axe head lost by one of the "children of the prophets" float, by throwing a piece of wood into the water (2 Kings 6:6).

Yom HaAliyah (Aliyah Day, Hebrew: יום העלייה‎) is an Israeli national holiday celebrated annually on the tenth of the Hebrew month of Nisan to commemorate the Israelites crossing the Jordan River into the Land of Israel while carrying the Ark of the Covenant as recorded in the Hebrew Bible’s Book of Joshua. 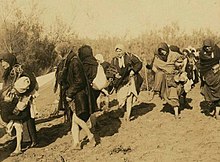 Christian women on pilgrimage to Al-Maghtas (1913)

The New Testament states that John the Baptist baptised unto repentance[28] in the Jordan (Matthew 3:5–6; Mark1:5; Luke 3:3; John1:28). These acts of Baptism are also reported as having taken place at Bethabara (John 1:28). 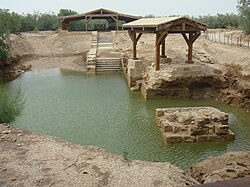 The prophecy of Isaiah regarding the Messiah which names the Jordan (Isaiah 9:1–2) is also reported in Matthew 4:15.

The New Testament speaks several times about Jesus crossing the Jordan during his ministry (Matthew 19:1; Mark 10:1), and of believers crossing the Jordan to come hear him preach and to be healed of their diseases (Matthew 4:25; Mark 3:7–8). When his enemies sought to capture him, Jesus took refuge at the river in the place John had first baptised (John 10:39–40).

Scholars have concluded that the site called Al-Maghtas on the east side has long been considered the location for the Baptism of Jesus and a place of pilgrimage though most current pilgrims go to a location on the west side, Qasr el Yahud, also long'established but not as early. This has led to choosing Al-Maghtas as a UNESCO World Heritage site, which took place in 2015.[29]

Because, according to Jewish tradition, the Israelites made a difficult and hazardous journey from slavery in Egypt to freedom in the Promised Land, the Jordan can refer to freedom. The actual crossing is the final step of the journey, which is then complete.

Because of the baptism of Jesus, water from the Jordan is employed for the christening of heirs and princes in several Christian royal houses, such as the cases of Prince George of Cambridge, Simeon of Bulgaria[30] and James Ogilvy.[31] Earlier, On 15 May 1717, the Empress Maria Theresa was baptised in Vienna by the Papal Nuntius Giorgio Spinola, representing Pope Clement XI, with baptismal water containing a few drops from the River Jordan.

The Jordan is a frequent symbol in folk, gospel, and spiritual music, and in poetic and literary works.

The Jordan River, due primarily to its rich spiritual importance, has provided inspiration for countless songs, hymns, and stories, including the traditional African-American spiritual/folk songs "Michael Row the Boat Ashore", "Deep River", and "Roll, Jordan, Roll".[citation needed] It is mentioned in the songs "Eve of Destruction", "Will You Be There", and "The Wayfaring Stranger" and in "Ol' Man River" from the musical Show Boat. "The Far Side Banks of Jordan" by Johnny Cash and June Carter Cash on June's Grammy Award-winning studio album, Press On, mentions the Jordan River as well as the Promised Land.[citation needed] Jordan River is also the subject of roots reggae artist Burning Spear's song of the same title.[32] Belarusian band Spasenie dedicated its whole album “Crossing the Jordan” to the topic.[33]