From Wikipedia, the free encyclopedia
Jump to navigation Jump to search
Ancient Egyptian goddess of fertility

Heqet (Egyptian ḥqt, also ḥqtyt "Heqtit") is an Egyptian goddess of fertility, identified with Hathor, represented in the form of a frog. [1] To the Egyptians, the frog was an ancient symbol of fertility, related to the annual flooding of the Nile. Heqet was originally the female counterpart of Khnum, or the wife of Khnum by whom she became the mother of Her-ur.[2] It has been proposed that her name is the origin of the name of Hecate, the Greek goddess of witchcraft.

The name is written as ḥqt with the determinative "frog" (I7).[3] The phonetic spelling may use the biliteral ḥq hieroglyph (S38) in place of uniliteral ḥ (V28). The alternative form ḥqtyt adds an explicit feminine ending, used alongside the "egg" determinative (H8) to emphasize the deity's femininity.[2] The Middle Egyptian pronunciation of the name may have been close to /ħaˈqaːtat/, which has been proposed (among other possibilities) as the origin of the name of Greek Hecate (Ἑκάτη).[4]

The god Khnum, accompanied by Heqet, moulds Ihy in a relief from the mammisi (birth temple) at Dendera Temple complex. 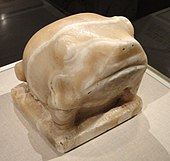 The beginning of her cult dates to the early dynastic period at least. Her name was part of the names of some high-born Second Dynasty individuals buried at Helwan and was mentioned on a stela of Wepemnofret and in the Pyramid Texts. Early frog statuettes are often thought to be depictions of her.[5]

Heqet was considered the wife of Khnum, who formed the bodies of new children on his potter's wheel.[6]

A temple dedicated to Horus and Heqet dating to the Ptolemaic Period was found at Qus.[8][9]

As a fertility goddess, associated explicitly with the last stages of the flooding of the Nile, and so with the germination of corn, she became associated with the final stages of childbirth. This association, which appears to have arisen during the Middle Kingdom, gained her the title She who hastens the birth (cf. the role of Heqet in the story of The Birth of the Royal Children from the Westcar Papyrus[10]). Some say[clarification needed] that—even though no ancient Egyptian term for "midwife" is known for certain—midwives often called themselves the Servants of Heqet, and that her priestesses were trained in midwifery.[11][better source needed] Women often wore amulets of her during childbirth, which depicted Heqet as a frog, sitting in a lotus.