Doric, or Dorian (Ancient Greek: Δωρισμός, romanized: Dōrismós) was an Ancient Greek dialect. Its variants were spoken in the southern and eastern Peloponnese as well as in Sicily, Epirus, Southern Italy, Crete, Rhodes, some islands in the southern Aegean Sea and some cities on the south east coast of Anatolia. Together with Northwest Greek, it forms the "Western group" of classical Greek dialects. By Hellenistic times, under the Achaean League, an Achaean-Doric koiné language appeared, exhibiting many peculiarities common to all Doric dialects, which delayed the spread of the Attic-based Koine Greek to the Peloponnese until the 2nd century BC.[3]

It is widely accepted that Doric originated in the mountains of Epirus in northwestern Greece, the original seat of the Dorians. It was expanded to all other regions during the Dorian invasion (c. 1150 BC) and the colonisations that followed. The presence of a Doric state (Doris) in central Greece, north of the Gulf of Corinth, led to the theory that Doric had originated in northwest Greece or maybe beyond in the Balkans. The dialect's distribution towards the north extends to the Megarian colony of Byzantium and the Corinthian colonies of Potidaea, Epidamnos, Apollonia and Ambracia; there, it further added words to what would become the Albanian language,[4][5] probably via traders from a now-extinct Illyrian intermediary.[6] In the north, local epigraphical evidence includes the decrees of the Epirote League, the Pella curse tablet, three additional lesser known Macedonian inscriptions (all of them identifiable as Doric),[7] numerous inscriptions from a number of Greek colonies, etc.. Furthermore, we also have plenty of local coins and names that assist us in our study of the northern Doric dialects. Southern dialects, in addition to numerous inscriptions, coins, and names, have also provided much more literary evidence through authors such as Alcman, Pindar, Archimedes of Syracuse, and many others, all of whom wrote in Doric. Last, we also have ancient dictionaries, such as the one from Hesychius of Alexandria, whose work preserved many dialectal words from throughout the Greek-speaking world.

Where the Doric dialect group fits in the overall classification of ancient Greek dialects depends to some extent on the classification. Several views are stated under Greek dialects. The prevalent theme of most views listed there is that Doric is a subgroup of West Greek. Some use the terms Northern Greek or Northwest Greek instead. The geographic distinction is only verbal and ostensibly is misnamed: all of Doric was spoken south of "Southern Greek" or "Southeastern Greek."

Be that as it may, "Northern Greek" is based on a presumption that Dorians came from the north and on the fact that Doric is closely related to Northwest Greek. When the distinction began is not known. All the "northerners" might have spoken one dialect at the time of the Dorian invasion; certainly, Doric could only have further differentiated into its classical dialects when the Dorians were in place in the south. Thus West Greek is the most accurate name for the classical dialects.

Tsakonian, a descendant of Laconian Doric (Spartan), is still spoken on the southern Argolid coast of the Peloponnese, in the modern prefectures of Arcadia and Laconia. Today it is a source of considerable interest to linguists, and an endangered dialect.

The dialects of the Doric Group are as follows:

Laconian was spoken by the population of Laconia in the southern Peloponnese and also by its colonies, Taras and Herakleia in Magna Graecia. Sparta was the seat of ancient Laconia.

Many documents from the state of Sparta survive, whose citizens called themselves Lacedaemonians after the name of the valley in which they lived. Homer calls it "hollow Lacedaemon", though he refers to a pre-Dorian period. The seventh century Spartan poet Alcman used a dialect that some consider to be predominantly Laconian. Philoxenus of Alexandria wrote a treatise On the Laconian dialect.

Argolic was spoken in the thickly settled northeast Peloponnese at, for example, Argos, Mycenae, Hermione, Troezen, Epidaurus, and as close to Athens as the island of Aegina. As Mycenaean Greek had been spoken in this dialect region in the Bronze Age, it is clear that the Dorians overran it but were unable to take Attica. The Dorians went on from Argos to Crete and Rhodes.

Ample inscriptional material of a legal, political and religious content exists from at least the sixth century BC.

Corinthian was spoken first in the isthmus region between the Peloponnesus and mainland Greece; that is, the Isthmus of Corinth. The cities and states of the Corinthian dialect region were Corinth, Sicyon, Archaies Kleones, Phlius, the colonies of Corinth in western Greece: Corcyra, Leucas, Anactorium, Ambracia and others, the colonies in and around Italy: Syracuse, Sicily and Ancona, and the colonies of Corcyra: Dyrrachium, and Apollonia. The earliest inscriptions[permanent dead link] at Corinth date from the early sixth century BC. They use a Corinthian epichoric alphabet. (See under Attic Greek.)

Corinth contradicts the prejudice that Dorians were rustic militarists, as some consider the speakers of Laconian to be. Positioned on an international trade route, Corinth played a leading part in the re-civilizing of Greece after the centuries of disorder and isolation following the collapse of Mycenaean Greece.

The dialects are as follows:

This dialect was spoken in Phocis and in its main settlement, Delphi. Because of that it is also cited as Delphian.[citation needed] Plutarch says that Delphians pronounce b in the place of p (βικρὸν for πικρὸν)[12]

The dialect of Elis is considered, after Aeolic Greek, one of the most difficult for the modern reader of epigraphic texts[14] (earliest c. 600 BC)[15] 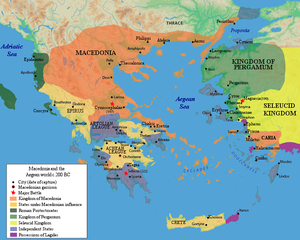 The Northwest Doric koina refers to a supraregional North-West common variety that that emerged in the third and second centuries BCE, and was used in the official texts of the Aetolian League.[16] Such texts have been found in W. Locris, Phocis, and Phtiotis, among other sites.[17] It contained a mix a of native Northwest Doric dialectal elements and Attic forms.[18] It was apparently based on the most general features of Northwest Doric, eschewing less common local traits.[16][19]

Its rise was driven by both linguistic and non-linguistic factors, with non-linguistic motivating factors including the spread of the rival Attic-Ionic koine after it was recruited by the Macedonian state for administration, and the political unification of a vast territories by the Aetolian League and the state of Epirus.[16] The Northwest Doric koina was thus both a linguistic and a political rival of the Attic-Ionic koina.[16]

A school of thought maintains that the Ancient Macedonian language may have been a Greek dialect, possibly of the Northwestern group in particular,[25][26][27][28][29][30] although other scholars would classify Macedonian as a separate marginal or "deviant Greek dialect" on its own.[31]

Proto-Greek long *ā is retained as ā, in contrast to Attic developing a long open ē (eta) in at least some positions.

Compensatory lengthening of e and o[edit]

In certain Doric dialects (Severe Doric), *e and *o lengthen by compensatory lengthening or contraction to eta or omega, in contrast to Attic ei and ou (spurious diphthongs).

Contraction of a and e[edit]

Literary texts in Doric and inscriptions from the Hellenistic age have no digamma.

For information on the peculiarities of Doric accentuation, see Ancient Greek accent#Dialect variation

t for h (from Proto-Indo-European s) in article and demonstrative pronoun.