From Wikipedia, the free encyclopedia
Jump to navigation Jump to search
This article is about the son of Jephunneh. For the other biblical Caleb, see Caleb (son of Hezron). For the given name, see Caleb (given name). For other uses, see Caleb (disambiguation). 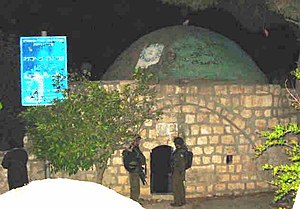 Caleb (/ˈkeɪləb/), sometimes transliterated as Kaleb (Hebrew: כָּלֵב‎, Kalev, Hebrew pronunciation: [kaˈlev]; Tiberian vocalization: Kālēḇ; Hebrew Academy: Kalev), is a figure who appears in the Hebrew Bible as a representative of the Tribe of Judah during the Israelites' journey to the Promised Land. A reference to him is also found in the Quran, although his name is not mentioned.

According to The Jewish Encyclopedia, "since 'Caleb' signifies dog, it has been thought that the dog was the totem of [Caleb's] clan".[1] The New American Standard Exhaustive Concordance states that the name Kaleb (Caleb) is related to the word for "dog" (keleb).[2] The Bible was written down centuries before Hebrew diacritics were introduced, and there is no certain knowledge of how the name was pronounced when the biblical text was written.

In Modern Hebrew, the name is pronounced [kaˈlev]; the modern English pronunciation /ˈkeɪləb/ is courtesy of the Great Vowel Shift.

An alternate Hebrew meaning offered for Caleb is "faithful, devotion, whole hearted, bold, brave". This is on the basis of its being actually a compound word, a phenomenon quite common in ancient Hebrew. Col (כל, Kaf + Lamed) = "all" or "whole"; Lev (לב, Lamed + Bet) means "heart". Therefore, Caleb (or Calev as pronounced in Hebrew) would actually mean "whole hearted". This might be due to the Biblical Caleb, a companion of Moses and Joshua, being noted for his astute powers of observation and fearlessness in the face of overwhelming odds. 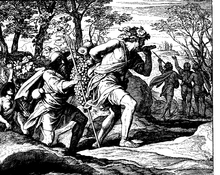 Return of the Spies, 1860 woodcut by Julius Schnorr von Karolsfeld

Caleb, son of Jephunneh (Numbers 13:6) is not to be confused with Caleb, great-grandson of Judah through Tamar (1 Chronicles 2:3-9). This other Caleb was the son of Hezron, and his wife was Azubah (1 Chronicles 2:18,19).

According to Numbers 13, Caleb, the son of Jephunneh, was one of the twelve spies sent by Moses into Canaan. Their task, over a period of 40 days,[3] was to explore the Negev and surrounding area, and to make an assessment of the geographical features of the land, the strength and numbers of the population, the agricultural potential and actual performance of the land, settlement patterns (whether their cities were like camps or strongholds), and forestry conditions. Moses also asked them to be courageous and to return with samples of local produce.[4]

In the Numbers 13 listing of the heads of each tribe, verse 6 reads "Of the tribe of Judah, Caleb the son of Jephunneh." Caleb's report balanced the appeal of the land and its fruits with the challenge of making a conquest.

Verse 30 of chapter 13 reads "And Caleb stilled the people toward Moses, and said: 'We should go up at once, and possess it; for we are well able to overcome it.'"[5] Caleb and Joshua said the people should trust God and go into the land; the other ten spies, being fearful and rebellious, argued that conquering the land was impossible.

Caleb the spy is the son of Jephunneh. Jephunneh is called a Kenizzite (Numbers 32:12, Joshua 14:6,14). The Kenizzites are listed (Genesis 15:19) as one of the nations who lived in the land of Canaan, at the time that God covenanted with Abram (Abraham) to give that land to his descendants forever (Genesis 17:8). However, Caleb is mentioned alongside the descendants of Judah recorded in 1 Chronicles 4: "And the sons of Caleb the son of Jephunneh: Iru, Elah, and Naam; and the sons of Elah: Kenaz" (1 Chronicles 4:15).[5] Numbers 13:6, likewise, lists Caleb as a tribal leader in Judah.

The Kenizzites are generally considered an Edomite clan (see Genesis 36:40-43).[6]

In the aftermath of the conquest, Caleb asks Joshua to give him a mountain in property within the land of Judah, and Joshua blesses him as a sign of God's blessing and approval, giving him Hebron (Joshua 14). Since Hebron itself was one of the Cities of Refuge to be ruled by the Levites, it is later explained that Caleb actually was given the outskirts (Joshua 21:11-13). Caleb promised his daughter Achsah in marriage to whoever would conquer the land of Debir from the giants. This was eventually accomplished by Othniel Ben Kenaz, Caleb's nephew (Judges 1:13), who became Caleb's son-in-law as well (Joshua 15:16,17).

1 Samuel 25:3 states that Nabal, the husband of Abigail before David, was "a Calebite" (Hebrew klby).[7] It is not stated whether this refers to one of the Calebs mentioned in the Bible, or another person bearing the same name.

Traditional Jewish sources record a number of stories about Caleb which expand on the biblical account.

One account records that Caleb wanted to bring produce from the land, but that the other spies discouraged him from doing so in order to avoid giving the Israelites a positive impression of Canaan. They only agreed to carry in samples of produce after Caleb brandished a sword and threatened to fight over the matter.[8] A Midrash refers to Caleb being devoted to the Lord and to Moses, splitting from the other scouts to tour Hebron on his own and visit the graves of the Patriarchs.[9] While in Canaan with the spies, Caleb's voice was so loud that he succeeded in saving the other spies by frightening giants away from them.[10]

Caleb is alluded to in the 5th Surah of the Quran (5:20-26). The two men alluded to here are Caleb and Joshua:

20 And when Moses said to his people: O my people, remember the favour of Allah to you when He raised prophets among you and made you kings and gave you what He gave not to any other of the nations.

21 O my people, enter the Holy Land which Allah has ordained for you and turn not your backs, for then you will turn back losers.

23 Two men of those who feared, on whom Allah had bestowed a favour, said: Enter upon them by the gate, for when you enter it you will surely be victorious; and put your trust in Allah, if you are believers.

24 They said: O Moses, we will never enter it so long as they are in it; go therefore thou and thy Lord, and fight; surely here we sit.

25 He said: My Lord, I have control of none but my own self and my brother; so distinguish between us and the transgressing people.

26 He said: It will surely be forbidden to them for forty years -- they will wander about in the land. So grieve not for the transgressing people.[11]