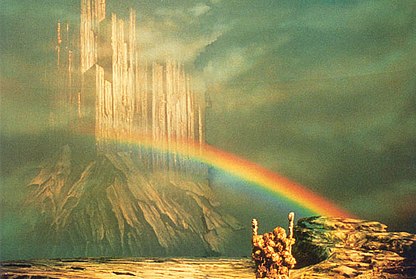 Asgard (Old Norse: Ásgarðr; “Enclosure of the Aesir”) is a location associated with gods. It is depicted in a multitude of Old Norse sagas and mythological texts.[1] Some researchers have suggested Asgard to be one of the Nine Worlds surrounding the tree Yggdrasil.[2] In Norse Mythology, Asgard is a fortified home to the Aesir tribe of gods located in the sky.[3] Asgard consists of smaller realms that do not have as many depictions in mythological poems and prose.[4] Asgard is set to be fully destroyed during Ragnarök, and later restored after the world's renewal.[5]

The word Asgard consists of the Old Norse words āss (god) and garðr (“enclosure”).[1] The latter is crucial to understanding the cultural and religious underpinnings of Norse mythology. It originates from the Germanic terms innangard (“inside the fence”) and utangard (“beyond the fence”).[6] Innangard represents the ordered state of existence, while utangard embodies chaos and disorder. The walls surrounding Asgard signify its orderly nature and Aesir gods’ organised way of living.[7]

Historians refer to three principal sources that depict Asgard. They include the Poetic Edda, the Prose Edda, and Heimskringla, which consists of several sagas.[8]

The Poetic Edda consists of several Old Norse poems of unknown authorship that date back to the 13th century. The majority of these poems come from the medieval text Codex Regius, also known as Konungsbók.[9]

Völuspá, the first poem in the Poetic Edda, provides some of the most complete and accurate depictions of the 12 lesser realms of Asgard, which include Breidablik, Valhalla, and Thrudheim.[8] It also describes the Yggdrasil, a mythical tree that connects all Nine Worlds with Asgard located beneath one of its three roots.[9] Finally, Völuspá provides a vague description of the location of Iðavöllr, one of the most common meeting places of Aesir gods.[3]

Grímnismál is one of the shorter poems in the Poetic Edda. It contains a brief depiction of Bifröst, one of the 12 realms of Asgard that connects it to Midgard.[9]

The Prose Edda, also referred to as the Younger Edda, is often attributed to the 13 th century historian Snorri Sturluson. As one of the most detailed descriptions of Norse mythology, the Prose Edda provides a thorough history of Asgard and its inhabitants. It consists of four parts: Prologue, Gylfaginning, Skáldskaparmál, and Háttatal.[10]

In Prologue, Snorri Sturluson shares his interpretation of the Skaldic poems and legends. His analysis corresponds to modern historians’ belief that Aesir gods were, in fact, real clans that travelled from the East to northern territories.[10] According to Snorri, Asgard represented the town of Troy before Greek warriors overtook it. After the defeat, Trojans moved to northern Europe, where they became a dominant group due to their “advanced technologies and culture”.[10] Eventually, other tribes began to perceive the Trojans and their leader Trór (Thor in Old Norse) as gods.[1]

Gylfaginning, the second part of the Prose Edda, contains mythological depictions of world creation, in chronological order. In this section, Snorri establishes the fundamentals of Norse mythology, such as the creation and fortification of Asgard, and introduces the main Aesir gods such as Thor, Odin, and Baldur.[10] Gylfaginning also describes Ragnarök, an event that would bring destruction to the Nine Worlds and cause their subsequent rebirth.[11]

In Skáldskaparmál, Snorri shifts focus to language and the nature of poetry. In the dialogue between the Norse god, Aegir, and the Skaldic god, Bragi, it illustrates how various aspects of poetry and nature are intertwined.[10] This part of the Prose Edda highlights the war between Aesir and Vanir gods, including the fortification of Asgard.[3],[10]

Heimskringla is a collection of sagas written by Snorri Sturluson that contains accounts on the Swedish and Norwegian king dynasties. The name of the saga comes from kringla heimsins (“the circle of the world”).[7]

The first saga in the manuscript further develops Snorri’s historical interpretation of Old Norse mythos. In the Ynglinga Saga, he rejects his earlier notion of Troy as the historical location of Asgard.[5] Snorri then provides an overview of Norse kings and their dynasties based on earlier sagas and poems. In his texts, he provides short depictions of Aesir gods, often searching for parallels between them and Norse kings.[3],[5]

While many sources mention Asgard as consisting of numerous distinct realms, only a handful of sagas provide their descriptions.[8]

Ruled by Odin, Valhalla is fortified with a golden hall where the souls of mighty warriors arrive after their deaths in battle.[9] It also serves as a home to Valkyries who oversee the souls of the dead and guide them to Valhalla. As attested in the Poetic Edda, Odin amasses an army, einherjar, for Ragnarök, where his warriors are expected to join him in battle.[7] They train daily against each other to hone their combat skills. However, only half of those who have fallen in combat reach Valhalla. The others arrive at another realm, Fólkvangr, where the goddess Freyja resides.[3]

Bifröst differs from other realms, as it connects Asgard, the world of gods, with Midgard, the world of people.[7] In the Prose Edda, Snorri describes it as a rainbow bridge that starts in Himinbjörg.[10] The Poetic Edda ultimately predicts its destruction in Ragnarök during the attack of the Muspelheim forces.[9]

Fólkvangr is a rarely depicted realm of Asgard.[8] Besides accepting hand of those slain in battles, Fólkvangr’s principal inhabitants include Freyja and her two daughters, Gersemi and Hnoss. They reside in the main hall, Sessrúmnir, which is decorated with natural ornaments.[3] Sagas in the Poetic Edda mention Fólkvangr’s rich flora and fauna, which correlates with Freyja’s love for nature and wild creatures.[8]

Located on the border of Asgard, Himinbjörg is home to the god Heimdallr, who watches over Midgard and humanity.[1] The Poetic Edda depicts Heimdallr as “drinking fine mead” in Himinbjörg while protecting the rainbow bridge, Bifröst. When enemies from Muspelheim destroy Bifröst, Heimdallr will blow in his horn Gjallarhorn to announce the beginning of Ragnarök.[9]

According to Grímnismál, Bilskírnir is the largest building and one of the most significant realms of Asgard.[9] It contains 540 rooms and serves as a residence of Thor, his wife Sif, and their many children.[3] In the Prose Edda, Snorri predicts the partial destruction of Grímnismál during the battle between Thor and the World Serpent Jörmungandr when Ragnarok comes.[10]

Upon arrival in Asgard, Aesir gods make it their home, as attested by Snorri in the Prose Edda. After counselling with the head of Mimir, Odin assigns other gods to rule separate parts of the land and build palaces.[10] However, their territories remain open to attacks from enemies, forcing Aesir to protect their lands.[7]

One day, an unnamed giant, claiming to be a skillful smith, arrives at Asgard on his stallion, Svadilfari.[10] He offers help in erecting a protective wall around Asgard in a mere three winters. In return for this favour, he asks for the sun, moon, and marriage with Freyja. Despite Freyja’s opposition, the gods agree to fulfill his request if he builds a wall in just one winter.[12] As part of the deal, they guarantee the giant’s safety.[3]

As time goes on, the gods grow desperate, as it becomes apparent that the giant will construct the wall on time. To their surprise, his stallion contributes much of the progress, swiftly moving boulders and rocks.[10],[12] To preserve Freyja and keep the sun and moon, one of the gods, Loki, comes up with a plan. He changes his appearance to that of a mare, and distracts Svadilfari to slow down construction.[12] Without the help of his stallion, the giant cannot complete his task in time, and Thor breaks his skull with a hammer.[10] Several months later, Loki gives birth to an eight-legged stallion, Sleipnir, who later becomes Odin’s steed.[3] Aesir gods later finish the wall and fully fortify Asgard for future battles.[12]

Ragnarök consists of a series of foretold events that ultimately lead to the destruction and subsequent renewal of the world.[1]

Ragnarök begins after the invasion of fire giants from Muspelheim, who destroy the Bifröst.[9] This causes Heimdallr to blow the Gjallarhorn, announcing the upcoming doom of gods. Odin swiftly consults with the head of Mimir, who foretells the destruction of Asgard and Odin’s death.[3],[9]

Aesir gods decide to march into battle, gathering their forces on the battlefield Vigrid (“Plain Where Battle Surges”).[6] Their enemies, led by the fire giant Surt, march through Asgard, destroying many of the palaces and fortifications.[10] Odin, Thor, Loki, Heimdallr, and other gods, die in the battle.[11] As the Vigrid grounds become soaking wet with blood, the world is submerged underwater, ending everything that ever existed.[9]

As attested in the Völuspá, after the destruction of the old world, a new one emerges. Several gods survive and restore Asgard, bringing it to the highest-ever levels of prosperity.[8]

Logo of the 2017 film Thor: Ragnarok, featuring Asgard and other elements from the Norse mythology

Thor first appeared in the Marvel Universe within comic series Journey into Mystery in the issues #83 during August 1962. Following this release, he becomes one of the central figures in the comics along with Loki and Odin.[13] In the Marvel movie franchise, Thor and Loki make their first appearance together in the 2011 film Thor. After that, Thor becomes a regular character in the Marvel Cinematic Universe and reappears in several films, including the Avengers series. Asgard becomes the central element of the film Thor: Ragnarok, where it is destroyed following the Old Norse mythos. These and other Norse mythology elements also appear in video games, tv series, and books based on the Marvel Universe.[13]

These depictions do not follow the Old Norse sagas and poems carefully. However, many philologists began to notice an increased interest in Norse mythology from the general public due to their popularity.[13],[8]